The topics from the Virtual Alexandria forum are now merged with the main forum.
This came with more moving things around. Sorry if this causes any confusion: I promise this will settle down soon!

Still, nothing should be missing. As always, please let me know if you miss anything and I'll try and fix it.

What is this gnosticism, anyway?
Forum rules
Keep in mind that everything posted in this sub-forum is visible for the outside world
Post Reply
1 post • Page 1 of 1

I just posted the following article to my Gnostic blog at https://newgnosticgospel.blogspot.com.

It is often said that there is no single Gnostic text or philosophy. While it is true that there is much diversity in the texts of the Nag Hammadi over details, there is a certain set of core beliefs that various Gnostics should be able to agree upon. Below is a diagram taken from my Simple Explanation blog and book that applies just as well to Gnostic beliefs. Let me explain-- 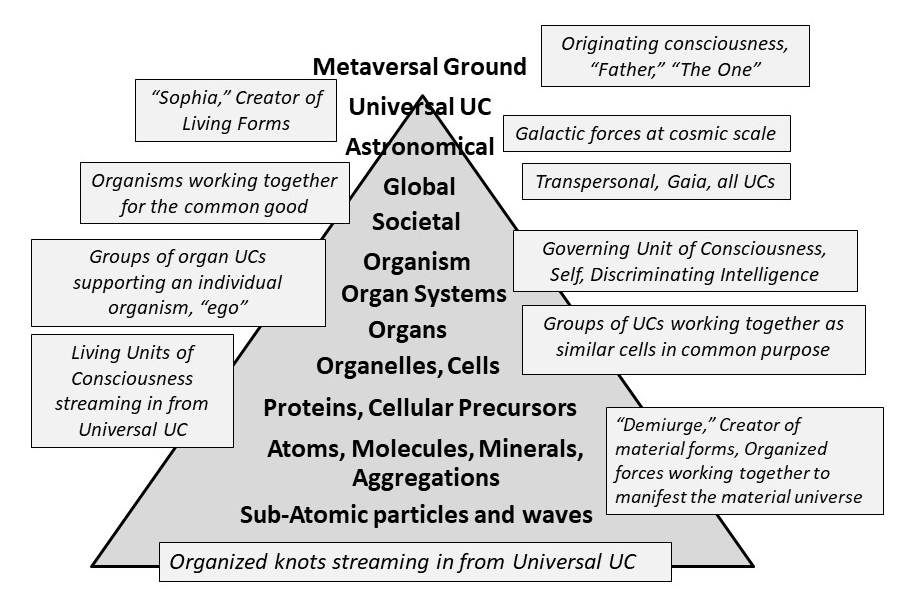 The diagram above was designed with the Simple Explanation of Absolutely Everything in mind. However, it works equally well as a Gnostic diagram that explains how our universe is put together. This article will define the words that both philosophies use in an attempt to clear up any confusion of terms. If you are already familiar with the Simple Explanation, you can use this article to understand basic Gnostic belief. On the other hand, if you are a reader of the Nag Hammadi texts, you may find this diagram useful for sorting out our cosmogony.

The limitless consciousness the Gnostic books call the Father, or the God above Gods, is called the Metaverse in Simple Explanation terms. This originating consciousness is the One with no thought that forms the basis of all that follows. The diagram above places the Father/Metaverse outside of the triangle. The Father is the ground state behind the diagram, out of which everything else arises. 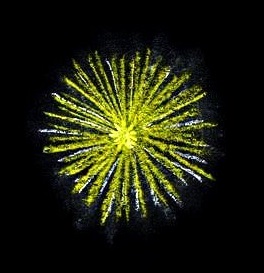 The Aeons are facets that emerge from the Son, each different from one another. The Aeons are like individual rays of the sun. Together they form the totality of the Son. The Aeons sit together in perfect harmony in a state known as the Fullness of God, also called the Pleroma. This aspect of Judaism and Christianity was cut out of the canonical texts of the Bible by the Emperor and the Pope during the Nicene Council's packaging of Christianity for the Empire. The Pleroma of the Aeons was well known to the Jews during the time of Jesus, and survives in the New Testament as references to "aeons" misinterpreted as units of time rather than units of consciousness. The "Fullness of God" is also contained in the Bible as a more vague reference to the size or capacity of the Father, which is basically true but stripped of its meaning as the aggregation of the Aeons. The Pleroma is the place of the "Elect" and the "Spiritual Ones," referenced in the New Testament.

According to Gnostic texts, our universe was created when one of the Aeons deviated from its place in the Fullness and headed out on its own without consent. Most books of the Nag Hammadi identify this Aeon as "Sophia," while others identify it as the Aeon called "Logos." My own interpretation of the Gnostic gospel, The Gnostic Gospel Illuminated, identifies this Aeon with Logos. By the way, "Logos" in Greek means "the Word" or knowledge. "Sophia" in Greek means "wisdom."

The Gnostic gospels are religious books, and their rendition of these events carries implicit religious moral judgments. The Aeon who left to strike out on its own is said to have "Fallen." This "Fall" is the original Fall referenced in the Bible, not the Fall of Adam and Eve in the Garden, although it may be possible to consider the Garden as another word for the Paradise dreamt by the Fullness, and a reference to the same Fall as that of the Aeon. In my view, the Fall represents the rise of the Ego, as this Aeon acted on its own presumption with its own motives, apart from the will of the Father and the Fullness.

Then consciousness had a thought. This multidimensional Metaverse still lacked space and time but it now quivered with limitless mathematical potential unfolding into countless dimension. In a twinkling, our entire universe was imagined in the fullness of its complexity, from the tiniest quanta through the greatest astral body; every animal, vegetable, and mineral; every element. Every thing and every function.
Once the Metaverse had a particular thought, thought became an object in the great sea of no-thought... On this day that time began, consciousness wrapped itself around our universe, forming a border between us and infinity. Mind took on a shape. 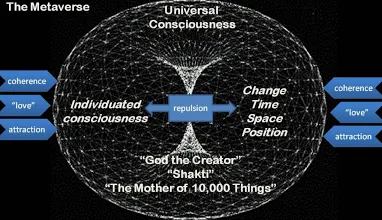 In the Simple Explanation, this shape is a torus-shaped container composed of conscious thought and its concept of this universe, which I call the Universal Unit of Consciousness (Universal UC). In Gnostic terms, this universal  "border" was thrown around the Fallen Aeon to limit its influence and hold it away from the Fullness until such time as the Fallen Aeon can be redeemed back to the Pleroma. The Universal Unit of Consciousness "sits" within the Metaverse and remains in communication with it.
As I said, Gnostic texts differ in their identification of the Fallen Aeon as either Sophia or Logos, although they seem to agree the Fallen produced this universe and its ruler. Once the Aeon fell, its abilities and plans spread throughout the contained space and created our universe. It is said that the Fallen Aeon was horrified by what was created and it retreated to the Fullness to figure out how to rectify the result of the Fall. Within the Pleroma a plan was hatched to deal with it.

Away from the Pleroma, contained within this newly formed space and time, a separated entity with all knowledge of this place became aware of itself. This entity thought it was the prime parent of the universe because it was not aware of the Pleroma or the Father and Son. This creator-god is called by Gnostics "the Demiurge." The Old and New Testaments call it the creator-god "Yahweh." One of the great heresies of Gnosticism is our identification of the creator-god as product of the Fall rather than the "God above gods," or the true "Father."

Because it is the result of the Fall and unsanctioned by both the Father and the Pleroma, the universe produced by the Demiurge is devoid of life. It is called the "Deficiency." The Deficiency is populated by small, lifeless things--things that are "shadows" of those that live in the Fullness. It is also populated by forces and principalities that arose from and were left behind by the Fallen Aeon. The Simple Explanation, being science and math based rather than religious, does not identify this universe as Fallen in the negative sense of being deficient. It is merely limited by localized monads replacing the omnipresent Metaverse.
Looking at the hierarchical diagram above, the Demiurge sits near the bottom, producing the minerals of our universe. As the Demiurge is contained away from the Father/Metaversal consciousness, it lacks the life force and love that characterize the Father. The Demiurge can only produce lifeless matter--"mud." The Demiurge is able to animate some of the mud by means of the forces and principalities contained within the Border. A good example of animated mud is viruses. Viruses are not alive, yet they are amazingly complex molecules that are able to carry out far-ranging search and destroy missions. It is also thought that the Demiurge produces lifeless entities out of pure force rather than material. These disembodied entities are called "archons." Archons are the offspring and servants of the Demiurge.

At this point in the story, many Gnostic texts explain how the Demiurge mated with the life-force carried by Sophia to produce living creatures out of the mud. Again, this is a religious description of the process of bringing consciousness to matter. Sophia is given the title of the Mother of Creation, bringing life to the universe. Her mission was authorized; it was the plan cooked up to redeem creation from the Fall.

The Simple Explanation identifies Sophia as the Universal Unit of Consciousness. Sophia resides on the outside of the fractal border that holds the universe apart from the Metaverse. As such, she is part of the toroidal flow, and it is this flow that pushes the life-force and consciousness out through the zero-point field at the center of the universal torus. In Gnostic terms, Sophia rides upon the outside of the Border, which I identify as "the waters" of ancient texts. Sophia's "face" “presses against the waters" and can be seen by the Demiurge, who is contained within the Border.

The ancient Gnostic texts say that Sophia mated with the Demiurge to produce the living creatures of our universe. Another way of saying this is that dead matter is imbued with life and consciousness at the point where it emerges from the zero-point field at the center of the Universal UC. Every living thing has its life force attached to the "mud" of its body at the point of conception. It is the consciousness given by the Father through the actions of Sophia melding with the otherwise dead material produced by the Demiurge that brings life to our universe. This is how "mud" becomes "meat." It is through this process of populating the universe with consciousness that the Fall and the Deficiency will be rescued. 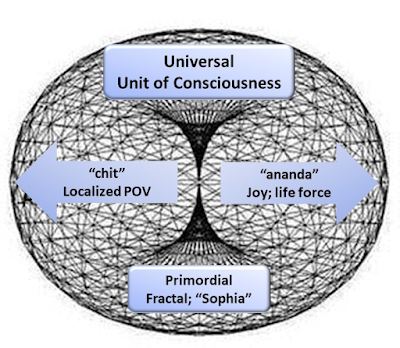 Looking at the hierarchical diagram, Sophia occupies a higher position than the Demiurge. The Demiurge is responsible for creating and controlling the dead material of the universe, while Sophia is responsible for birthing life and Units of Consciousness from the center, infusing them into the mud to create conscious life forms.

Gnostics can use this fresh insight to figure out other aspects of Gnostic belief, such as the relative strength and power of entities created by the Demiurge, versus entities imbued with the life force of the Fullness of God, that being the true Father and the God above the god of this material sphere. It is said that the life forms of this universe are the Second Order Powers sent to do battle with the forces of the Deficiency. We have been assured that the power that is in us is greater than the power that is in the world. I hope this article and the hierarchical diagram helps you to realize this.
Blessings. Onward and upward!