Why 'The Central Myths'?

Why 'The Central Myths'?

Word. Well as far as this "truth" goes, words do not suffice, even from a historical perspective. And I'm afraid epistemology as a "science of knowledge" only complicates matters further. But existentialists do not have the same problems with this that modern empiricists do, since existentialists essentially address the issue from a phenomenological perspective (which focuses on the study of consciousness from a first-person point of view). But instead of boring you with a lot of technical jargon, I will take the pragmatist route--in the manner of John Dewey--and classify the nature of this "truth" simply as experience.

Your're not boring me with technicalities. Quite the contrary, in fact

- I find it very interesting to know more about that. I don't know very much about philosophy, at least not in the academic / scholarly sense of the word. I read Plato and some "history of philosophy"-type books, and I'm very much intrigued by books like Robert Pirsig's 'Zen & the art of motorcycle management'; but in my mind, the term 'existentialism' only associates with names like Sartre and a certain kind of French black-and-white movies that featured guys wearing narrow black sweaters, engaged in 'dialogues about existentialism' while continually smoking 'gauloises' cigarettes and listening to bebop jazz music. 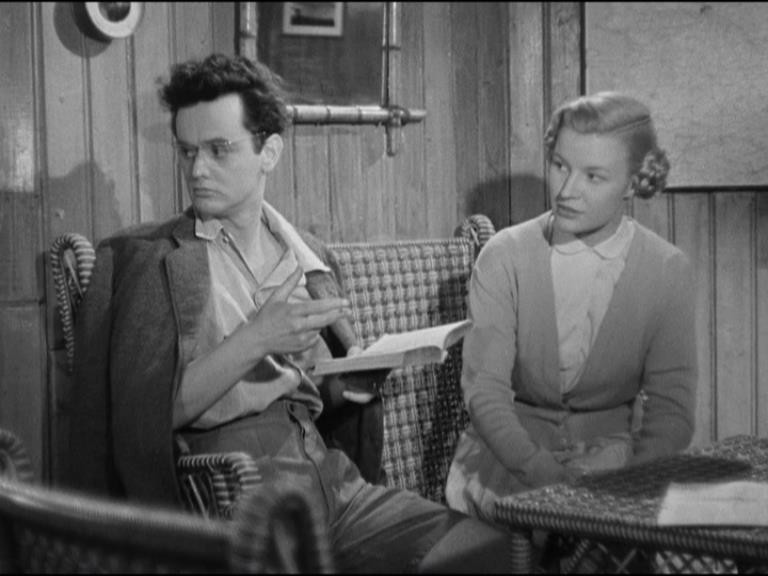 I wasn't aware that they held similar views re. the significance of experience.
A! Elin velui, dîn dolog, aduial lúthad!
Top

I've always thought that the gist of existentialism is that life is inherently pointless and it is up to each individual to discover meaning in his or her own life. Purpose cannot come from outside the self. Is this correct, or is there more to it than that?
-Raúl
Top

Yes, they do have similar views, in fact. Existentialism along with American Pragmatism are two very misunderstood schools of thought, unfortunately. In both cases, experience or "transcendence" is the defining feature of each and, therefore, both can be considered a non-theistic humanism, of sorts, which place an emphasis on the personal experience of the individual. Not surprisingly, many interesting parellels can be drawn between eastern philosophies and both the existentialist and pragmatist schools.To give you some idea, John Dewey has been referred to as a 'second Confucius' and the influence of eastern philosophy on Heidegger is well-known. Moreover, Jung has sometimes been classified as an existentialist himself, which may seem a bit odd at first glance. But unlike Nietzsche who essentially proposed to do away with the Judeo-Christian God 'Jehovah' altogether, Jung proposed that our understanding of God should be restored to the imagination. Perhaps, what is more interesting in regards to Nietzsche and Jung are the parallels that can be drawn with Gnosticism. As a matter of fact, Nietzsche was not the first to try to kill off the God of the old testament, the first was a gnostic sect in the 1st century known as the Marcionites. It is not known whether Nietzsche was, indeed, influenced by the works of Marcion, but some have suggested the possibility, nevertheless. The gnostic influences on Jung are obvious, however. In either case, the door is opened up for the individual to transcend mundane reality, since this notion of the Judeo-Christian God as the ultimate 'authority figure' is essentially removed. In this respect, the Gnostics answered to a higher God--one which is transcendental and intrapersonal. Of course, it is not a necessity to think of God in this way, but it is a defining characteristic in gnostic thought. One could say, perhaps, that it comes with the understanding of one's own divinity: that we are not simply God's subordinates, but that God is also in us. As Jung puts it: For the alchemist the one in need of redemption is not man, but the deity lost and sleeping in matter. For Nietzsche, the Superman, or the Übermensch, is the embodiment of this 'deity within.' Contrary to popular belief, Nietzsche did not have a high opinion of atheists, but referred to them as "lastmen" also, since the lastman is esentially what we would call today a materialist or a "person who is still asleep." Therefore, Nietzsche's idea of the Superman (also referred to as the Overman) is very Gnostic, that is, if you understand Nietzsche's message. Someone once said, the curse of the Gnostics is that they have eyes to see, and hears to hear.

Not sure if that answered your question Skookum, but you are right also. That is the "essential" message of the existentialists, although perhaps reduced to its lowest common denominator, but it is part of this broader theme of transcendence. The idea is to transcend religion, transcend to a higher level of consciousness, a higher reality. In doing so, we define our own meaning and values, in a similar fashion as Jung did and also the Gnostics.
Top

Perhaps, some interesting parallels can also be drawn between Nietzsche and Tolkien. Thus Spoke Zarathustra could be seen as Nietzsche's central myth. Of course, it's not near as imaginative as Tolkien's myths, I give you that, but I do think it's an interesting example of mythopoeia. You know, that's one thing everybody can get in on--examining the contents of myths and discovering hidden meaning. There's something about the power of myth-making that seems to bring people together. I don't know what it is, but it seems everybody can have their own opinions on it and, at the same time, no one is wrong. It also doesn't set off hostilities, unlike arguing from a more "religious" perspective, not that anyone here is hostile or anything.

But how about that as a new topic on the main discussion board? Anyone interested in discussing the central myths of either the Gnostics, Nietzsche, or Jung? I'm no expert on any, by any means, but I can pierce beneath the surface to dig out some hidden meaning here and there. I'd love to get into Tolkien, but I'll have to wait 'till the end of the semester to familiarize myself with Tolkien beyond a superficial level. What say ye?
Top

sorry, I was a bit busy last week.


Übermensch wrote:But how about that as a new topic on the main discussion board? Anyone interested in discussing the central myths of either the Gnostics, Nietzsche, or Jung? I'm no expert on any, by any means, but I can pierce beneath the surface to dig out some hidden meaning here and there. I'd love to get into Tolkien, but I'll have to wait 'till the end of the semester to familiarize myself with Tolkien beyond a superficial level. What say ye?

Sounds great! "The central myths" would be wonderful as a top level forum, because it's a very rich and significant topic.

The setup of the board is still preliminary, so I say we add "The central myths" directly under Gnosticism.
A! Elin velui, dîn dolog, aduial lúthad!
Top

That sounds like it would be a great discussion. I'm familiar with the gnostic mythos and I've read "Thus Spake..." although it wasn't my favorite. I recently bought "Psychology of The Unconscious" by Jung. I've read a little bit of Jung before. I'd love to learn more about this.
-Raúl
Top

Sounds good to me, Lúthien!

So...you can set up the top level forum Lúthien. There's at least three of us, and perhaps we can lure Dave in if he's returned to the land of the living.
-Raúl
Top

Will do, as soon as I've finished moving to the other hosting provider!
A! Elin velui, dîn dolog, aduial lúthad!
Top

Übermensch wrote:[...] But existentialists do not have the same problems with this that modern empiricists do, since existentialists essentially address the issue from a phenomenological perspective (which focuses on the study of consciousness from a first-person point of view).

So do cognitive scientists/AI researchers (one of my interests). At least the ones focussing on neural network research do, since "cognition from computation alone" has proven to be something of a dead-end.
Top

Übermensch wrote:[...] But how about that as a new topic on the main discussion board? Anyone interested in discussing the central myths of either the Gnostics, Nietzsche, or Jung? I'm no expert on any, by any means, but I can pierce beneath the surface to dig out some hidden meaning here and there. I'd love to get into Tolkien, but I'll have to wait 'till the end of the semester to familiarize myself with Tolkien beyond a superficial level. What say ye?

Sounds good to me.
Top

The brain is not a computer. Every generation thinks the brain is the mirror of the latest technology. In the 1800's they believed the brain was a vastly complex clockwork mechanism. Try getting most computer geeks to understand this though. To them the brain IS a computer, and science is right on the verge of figuring out how the the whole things works. We'll be downloading consciousness in 25 years. Last I heard they were having trouble replicating the brain of a lobster.
-Raúl
Top

Yes, I agree, one should remain skeptical of AI. Moore's law has slowed down significantly and computer power, may indeed, stagnate as silicon techology hits the physical limit. So physicists are quite certain there will be no "technological singularity," at the very least, until we are capable of going far beyond the current limitations of silicon technology. It is uncertain, last I checked, if Intel will release a 14nm chip--I think the prototype had problems with losing coherency. The biggest problem with inorganic circuits being a functional model for consciousness is that these circuits must be rigidly preprogrammed and the pathways are completely fixed--human consciousness is not so static. Our neural pathways are flexible, which is a necessary condition for learning. That is, in some ways, our internal circuitry is able to "reprogram" itself. If these circuits are to remain static, as in the case of AI, then this "reprogramming" must take place at the software level. The very proposition of creating a computer program capable of reprogramming itself is an inherently dubious one fraught with its own unique technological challenges, limitations, and barriers. This leads me to believe that if 'true' AI is to exist at all, then it will be the result of the development of flexible circuits capable of reprogramming themselves on the fly, which a team of physicists recently showed was at least theoretically possible--but making such circuitry a reality is 100-1000 years away, if ever. If you believe in the functional model of human consciousness (which I don't, personally), then this will get us one step closer to the functional equivalent of human consciousness but don't ask me how to program such a "learning circuit." We could reasonably expect to achieve AI which mimics the intelligence of insects, but in order to mimic human intelligence is something else entirely and would certainly not be based on silicon technology.
Top

My guess is they will move to biological 'circuits' under control of hormones and neuropeptides, since it is easier to do now that the genomes of many organisms have been sequenced. To use a 'fantasy' metaphor, that is why the Cylons in the reimagined Battlestar Galactica series moved to organic tech. Blade Runner also trends along this line.

Return to “The Central Myths”