To the upper left on the board's banner, you can see the logo of Ilsaluntë Valion.  It is an inverted crescent containing within its arms an accurate representation of most of the brightest stars in the Pleiades star cluster (called Remmirath, "The Netted Stars" in Quenya).  Also within its circle is the representation of the initialism of our name, "IV", expressed in Sarati†.

The over-arching crescent is suggestive of many things: the crescent of the Moon, the sphere of protection and power within magical workings, the nimbus of light said to surround holy Avatars (e.g. Christ, Buddha, some Hindu deities, etc.); and to an extent Eä itself, when thought of cosmologically as an "englobed whole".

Within the arch are the letters "IV", but in their Sarati rather than English alphabetic forms. Notice how the glyph for 'V' looks very much like a Fountain. Two of our Officers have had repeated visions of the Fountain of Nienna on their meditative journey's.

Since the focus of Ilsaluntë Valion is on interacting with these beings in the liminal space, and the restoration of Lore and knowledge from the Ancient West, we thought it important to explain the meaning behind our logo.
___

† For those who may wonder about the 'unorthodox' representation of the Sarati characters on our sail, I reproduce here part of a discussion Luthien and I had about this back in February of 2021:

===
Luthien: [...] I found the Eldamar Sarati font on Mans Björkmans site (where else

) and found in the included manual pdf (this guy is so amazingly thorough) that there are a couple of different writing modes: left-to-right, right-to-left and even vertical. to accommodate that, Mans provides six variations of the font - those three directions, and all with and without bar (that supposedly has no linguistic function, but is merely decorative).

In order to reproduce the characters we show in the logo - approximating “IV”, I need the vertical version of the font for the Sarata for 'V' to show up the right way - but then the "double dots” sarata representing the 'I' would need to be placed above the V instead of left of it. We use the vertical variety in a horizontal way, so to speak: 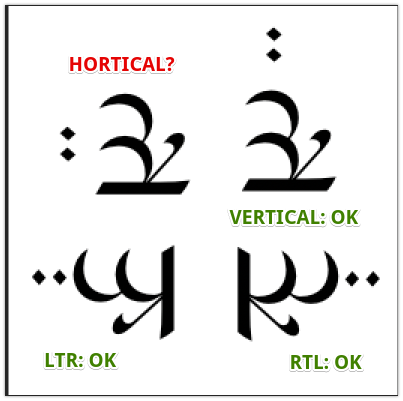 
I think it’s not that important though, but maybe we can fix it someday.
___

Me: I think I remember reading his manual (this would have been in November, 2007), but felt I had to place the 'I-colon' to the left in order to make room to fit the logo on the sail - unless we wanted a Spanish galleon with very wide sails or an unworkable ship with a very tall, narrow sail instead of a Viking longship design.

If you can find a more orthodox way that works, I'm fine with that.

I view pretty much all writing systems as a symbol-set for tagging, anyway, when I use them in an artistic manner at all.

Luthien: I like the way it is now the best as well, so let’s just keep it

Return to “About this forum”