I just found this today, when browsing a Wikipedia page about the work of Dutch author / comic book artist Marten Toonder.
He passed away about 10 years ago, and created a large oeuvre of stories (mostly running text illustrated by smaller thumbnail images across the top third of the page) revolving around several anthropomorphic personages: “Tom Puss”, a smart fellow (cat); “Ollie B. Bommel”, a good-natured but naïeve and blundering bear in a loud jacket who dwells in a castle due to an inherited fortune and many others.

The setting is heavily influenced by Irish folklore, because Mr. Toonder dwelt in Ireland for a long time. It seems that he maintained in interviews that he even encountered some of the “little folk”, who also play an important part in his stories.

Well, one of that little folk is called Kwetal (which sounds similar to Dutch for “I know everything”) who is a kind of dwarf / elemental, and who oftentimes constructs very strange devices that for instance transports things to another world or dimension.
Because Kwetal has an inexplicable high opinion of Bommel (he thinks that Bommel has a “huge mental frame”) he sometimes trusts Bommel with his contraptions who then gets into deep trouble - and Tom Puss has to save him.

Now, one of Kwetal’s devices is called an “Oloroon” (or “Space Siphon”) that creates access to other worlds, often described as “dream worlds” or “the subconscious”.

Ok - getting to the point at last - there’s a footnote in the Wikipedia page about the Oloroon that goes like this: (translated from Dutch):


The word “Oloroon” may relate to Olórin, one of the names of Gandalf, meaning “dreamer” or “of dreams”, from the stem olor-, in Quenya, the language that is spoken by the elves in the works of J.R.R. Tolkien

I like the fact in Dutch "Middle-earth" translates to "Midden-Aarde": sounds similar to Quenya "Arda"...

Nice article, aniway, I see some influences from H.G. Wells' "The Time Machine", which I always appreciated...
Our myths may be misguided, but they steer however shakily towards the true harbour, while materialistic 'progress' leads only to a yawning abyss and the Iron Crown of the power of evil. (J.R.R. Tolkien)
Top

I see that I forgot to add that the setting of Mr. Toonder's stories can be very 'deep' (in the way that Tolkien's Legendarium feels deep) at times depending on the story; others may be much more a pastiche of everyday reality. In which he often has an uncanny ability to predict social phenomena long before they appear, like that "reality-tv" Big Brother programme - he almost exactly described that in a story that was published twenty years earlier, including the element of exploitation of a certain type of people as dwellers.

And of course, the anthropomorphic characters and Mr. Toonder's great sense of humour also have the effect of lending the story an element of pastiche. But still, the "Fairie undercurrent" is unmistakable.


Here's a typical set of drawings for a page:

And this one could just as well depict Fangorn or the Old Forest where the Hobbits got lost in before Tom Bombadil finds them: 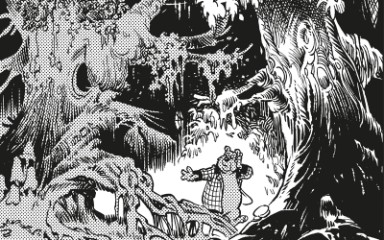 Here's an article that talks about Mr. Toonder's relationship with "the occult", but it's in Dutch.

Another Dutch article that goes into the particular 'magic' quality of his work. This fragment caught my eye, so I'll translate that now:

(...) magical forces that play a role in some of the stories, de ‘Wonderland-effect’, as Geel calls the phenomenon: ‘(the stories) oftentimes feature ramshackle gates of doorways through with the heroes have to pass.' Or, said otherwise: ‘the possibility that our three-dimensional universe is being intersected by other universes or 'space-time-continuums'. Mr. Tooner admitted to believe in these 'short-circuits between worlds' in the documentary that was broadcasted on television on December 29, 1972. According to him, there are places in Ireland where he lives (forests, ruins, places where ravens or crows gather) that are particularly suited as point of entry to those other worlds.
A! Elin velui, dîn dolog, aduial lúthad!
Top

I read somewhere that the tallest people in the world are Dutch people, plus the shipbuilding reminds me of Numenoreans. I remember reading in Russian about how Peter the Great spent a lot of time in the Netherlands learning how to build ships for his own armada in the Baltics. My family is from the Baltics too in Riga Latvia which was Russian territory at the time. My ancestors owned ships as they were involved with trade with England.
“All that is gold does not glitter,
Not all those who wander are lost;
The old that is strong does not wither,
Deep roots are not reached by the frost."
Top

That’s interesting what you say about Latvia and the trade with England. I don’t know what time you are referring to, but some years ago we did a cycling holiday along the German Baltic coast and passed many towns that had been part of the Hanseatic League: Hamburg, Lübeck, Rostock, etcetera. I read up on the subject a bit and found that the Hanseatic League had extended all the way to indeed the Baltic states (or maybe even further into Russia) - and on the western end there were also offices in the UK. Here in the Netherlands it was mostly some towns in the east of the country where I come from: Deventer, Zutphen and so on.

I found it fascinating that this economic league has been stable for so long and became so powerful that it could challenge nation states at the time. And today, all the former Hanseatic towns are still proud of their heritage

I’m referring to the 1700s. I think the Baltics came under Russian control by 1721.
“All that is gold does not glitter,
Not all those who wander are lost;
The old that is strong does not wither,
Deep roots are not reached by the frost."
Top
Post Reply
6 posts • Page 1 of 1