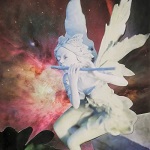 I'm just noticing that some resources say that Morgoth 'probably' created dragons although it is generally understood that Morgoth did not have the flame imperishable and could not create anything, he could only corrupt the forms of Eru. With this argument that Morgoth created dragons it is presumed that they are all therefore evil. However since it is the case that Morgoth did not have the power to create and could only corrupt, would that not imply that there were benevolent dragons, such as we may find in fantasy stories such as the Never-Ending Story?

The only clue I can find so far is the 'Spark-Dragon' or fealóke since fëa is the Quenya word for soul or spirit - on the Tolkien Gateway, the following is written:
consisting of fea ("spark"; from root PHAY-, "radiate, send out rays of light")
and:
"No story tells of their appearance in the history of Arda, but one can assume that somehow they radiated light (and therefore perhaps were related to, or were another name for, the great glow-worms)."

This link is quite interesting - it is mentioned that Melko "made" them - but I feel that this could only refer to made as in 'corrupted' just as the orcs were made from fallen elves if that makes sense?
http://www.thetolkienwiki.org/wiki.cgi? ... f__Dragons

the link refers to foalóke rather than fealóke - foalóke meaning 'breath/puff' 'dragon' and used to refer to a dragon which guarded treasure.

Has anyone here found a connection with benevolent dragons? How did you create this connection? I do not take plant medicine anymore (I don't have judgement towards it, however it took me a long time to integrate) - in 2012 I took ayahuasca and saw a red dragon wrapped around the centre of earth, it looked up at me and smiled. I have not spent any time trying to connect to dragon energy, however recently I have felt the calling and am curious to hear about anyone else's experiences,
thank you

Tess
"By the starlit mere of Cuiviénen, Water of Awakening, they rose from the sleep of Ilúvatar; and while they dwelt yet silent by Cuiviénen their eyes beheld first of all things the stars of heaven."
Top

Interesting that you bring this up. I agree Tolkien did state in many places that Morgoth cannot create and simply corrupts already existing creatures. The Fealoke reference is only reference that seems to leave it open for the existence of benevolent Dragons who may have been possessed of wisdom and complex intelligence. Also there is a theory that the Dragons were actually Maiar in Dragon form (similar to how Umaiar but this theory cannot be proven or disproven.

Yavanna is the one who song brought forth the Kelvar including serpents and maybe large monitor lizards which would probably be something 40 feet in length (12.19 m) which would look similar to Glaurang and would not be capable of flight. Glaurung is considered to be the Father of Dragons.

Then there is Ancalagon the Black the first of the winged dragons, who would have been quite an impressive sight in person. 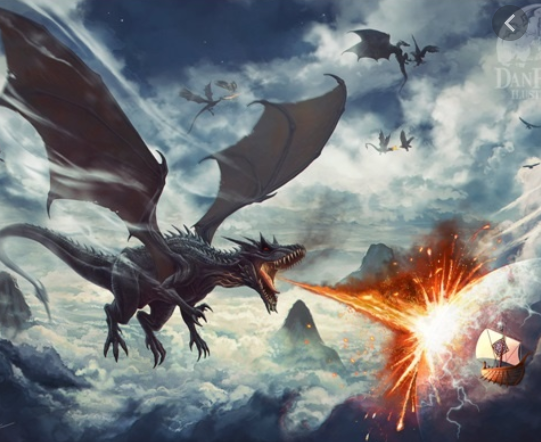 I think it can be connected to the Mother Goddess energies. In the Mediterranean there are statues and images of the mother goddess holding snakes. This can be found in Minoan civilization as well and in Minoan culture we see the goddess holding a serpent in each hand and represents the renewal of life just as the serpent sheds its skin. I can see a connection to Yavanna. 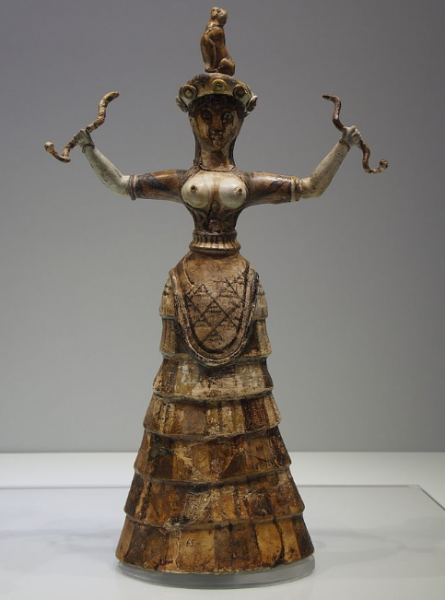 Dragons to me in uncorrupted form would probably glow in a similar fashion how the Elves themselves. I also envision the trunks of the Two Trees as having a serpentine shape. They are certainly connected to Earth and Earth-fire (Aule is the association here as the Smith of the World). The below image is from Tolkien Gateway. 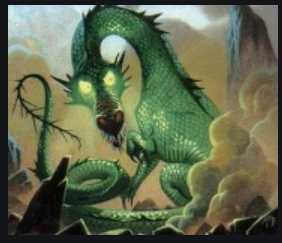 Ancalagon is referred to as the first of the winged Dragons which would seem to imply that he was "created" or rather made by Morgoth. But not sure how the process worked exactly, but Morgoth probably genetically engineered (for lack of a better term) these creatures for quite some time altering their evolution by manipulating energy in a certain way.
“All that is gold does not glitter,
Not all those who wander are lost;
The old that is strong does not wither,
Deep roots are not reached by the frost."
Top

I've always thought of the Dragons Tolkien wrote of as at least partially 'cybernetic'. Part of that is my natural attraction to Sci-Fi and AI, and part of it is this description (and others very much like it) from the Fall of Gondolin:


Then on a time Melko assembled all his most cunning smiths and sorcerers, and of iron and flame they wrought a host of monsters such as have only at that time been seen and shall not again be till the Great End. Some were all of iron so cunningly linked that they might flow like slow rivers of metal or coil themselves around and above all obstacles before them, and these were filled in their innermost depths with the grimmest of the Orcs with scimitars and spears; others of bronze and copper were given hearts and spirits of blazing fire, and they blasted all that stood before them with the terror of their snorting or trampled whatso escaped the ardour of their breath; yet others were creatures of pure flame that writhed like ropes of molten metal, and they brought to ruin whatever fabric they came nigh, and iron and stone melted before them and became as water, and upon them rode the Balrogs in hundreds; and these were the most dire of all those monsters which Melko devised against Gondolin.

Thank you Lomelindo and Meneldur,
I like this:
"altering their evolution by manipulating energy in a certain way."

I agree, that would explain the "made by Melko" references.

Yes - again interesting that you mention this: "I think it can be connected to the Mother Goddess energies."
I had recently bought a book called The Sun and the Serpent about earth energies and the St Michael ley line in the UK - I have only just started reading it and suddenly realised the title - serpent - I had totally missed it before because I was so focused on it being about earth energy, but they talk a lot about dragons and serpents in relationship with earth energy.
"By the starlit mere of Cuiviénen, Water of Awakening, they rose from the sleep of Ilúvatar; and while they dwelt yet silent by Cuiviénen their eyes beheld first of all things the stars of heaven."
Top

Meneldur Olvarion wrote: ↑Fri Jul 31, 2020 5:57 pm I've always thought of the Dragons Tolkien wrote of as at least partially 'cybernetic'. Part of that is my natural attraction to Sci-Fi and AI, and part of it is this description (and others very much like it) from the Fall of Gondolin:
(...)

That is an interesting thought, and there is indeed an element of mechanised warfare to the Fall of Gondolin.
Though elsewhere, dragons are also referred to as living creatures in several places in the SIlmarillion, as in "Of the return of the Noldor" where Glaurung is referred to as half-grown:


SIlmarillion, "Of the Return of the Noldor"
Again after a hundred years Glaurung, the first of the Urulóki, the fire-drakes of the North, issued from Angband’s gates by night. He was yet young and scarce half-grown, for long and slow is the life of the dragons, but the Elves fled before him to Ered Wethrin and Dorthonion in dismay; and he defiled the fields of Ard-galen.

I think there were most likely both kinds, with the cybernetic ones first being used in the Fall of Gondolin, but then Morgoth decided to make biological ones for whatever reason. I guess in his mind, the more stuff you corrupt, the better.
“All that is gold does not glitter,
Not all those who wander are lost;
The old that is strong does not wither,
Deep roots are not reached by the frost."
Top