In this essay, I shall investigate the properties of the drink known in the Legendarium as limpë, and how I believe that its major ingredient is the spice saffron, from the saffron crocus Crocus sativus. Since I am writing this article with a wider audience in mind than Tië eldaliéva, I will define more terms than usual. Any underlined word that is clickable is a relevant link that leads to a site that will expand upon this discussion, whether that be to a Wikipedia article, or to another Forum or website.

How I Made This Discovery

In private ritual the other night (2-18-2007), I was given information via Shamanic contact with one of the Valar (the being known as Estë). What follows is a quote from a private post informing the other T-e Admins of what had just happened, and how it was relevant to us:


For this part {of the ritual}, we called upon Estë.... We called the circle in the standard T-e way, and asked Estë if she had anything to show us for our personal healing. Estë said that Dineen {my wife} was on the right Path, and did not give her anything specific, but to me she said that I needed an herb to help me with the darker ruminative thoughts I often fall into. I asked her to show me this plant, and I saw its "grass-like" leaves right away, but the flower seemed to keep changing. The first idea I had was of a crocus, but I dismissed that, so then we tried to find an image of what I had seen in one of Dineen's herb-books. But I could not seem to find a good match...

Here is Dineen's explanation of what happened next:

[...] First of all, we figured out what the herb is that Estë told Dave use. It's saffron! Dave's strength lies with imagery, but because he's been longing for spring, he's been looking for images of crocuses lately to put on his desktop as wallpaper (as well as not recalling the saffron crocus as being an herbal plant) and was rejecting them from Her. The individual aspects of the plant image kept being given to him though and the words and sketches that he jotted down definitely point to the crocus even if he tried to deny it. Anyway, he had finally thought that the herb he was looking for was calendula though it wasn't quite right and somehow he popped with the first thing he saw was a crocus flower. I told him crocus must be saffron and gently scolded him for not accepting what he was first given and trying to edit it. In fact, I wonder if his obsession with crocuses has been Estë telling him what he needs. (As I am saying this to Dave as I type, he tells me this has been going on (off and on) for years, actually.)

Here are some images very close to those I first saw: 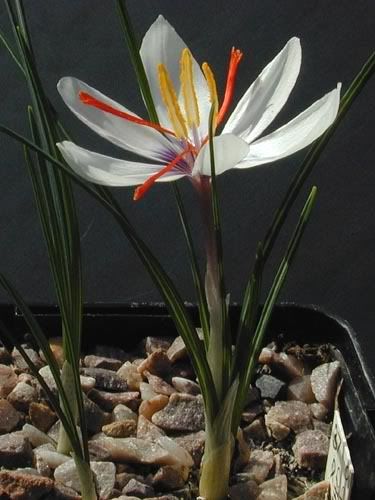 The flower seen from the side 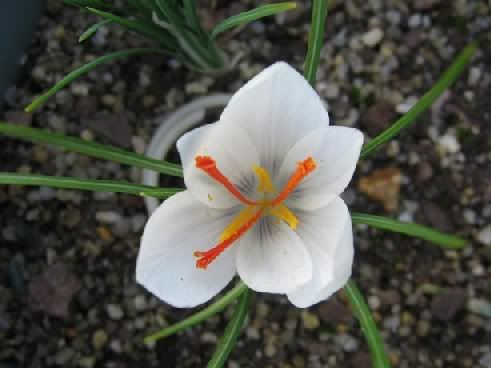 (Note that these are of Saffron's 'ancestor', Crocus cartwrightianus)

And, here is the Wiki on Saffron:

Saffron And Its Relation To Limpë -- The Evidence

As you can see, Saffron apparently has great healing properties. And it has been in use for thousands of years.

I also got an insight that this was the basis of limpë, particularly from these descriptions:

[...] then did Lindo fill his cup and after him Vaire and all those in the hall, but to Eriol he said: 'Now this which we put into our cups is limpë, the drink of the Eldar both young and old, and drinking, our hearts keep youth and our mouths grow full of song, but this drink I may not administer: [our queen] only may give it to those not of the Eldar race, and those that drink must dwell always with the Eldar of the Island until such time as they fare forth to find the lost families of the kindred.' Then he filled Eriol's cup, but filled it with golden wine from ancient casks of the Gnomes; and then all rose and drank 'to the Faring Forth and the Rekindling of the Magic Sun'. -- From the Book of Lost Tales 1

It may seem from this passage that the "golden wine" from the "ancient casks of the Gnomes [Noldor]" is something different, but it is my insight that this was probably just the wine-infusion base with either no saffron at all in it, or only enough to give it a tint; but not enough for a physiological effect (the amount to cause a color-change in a liquid is much less -- it was once used as a dye).

OK, so limpë's primary characteristics are:
Thus, there is a very close match between the only specific description we have of limpë, and the observed characteristics and effects of a saffron infusion.

More Info On The Medicinal Effects Of Saffron

There are more, but I thought these sufficient to demonstrate my point.

___
NOTE: What I was doing here regarding the Limpë was attempting to make something affine (not congruent, or more accurately: "not necessarily congruent") to Limpë as described, that was also personally useful. Since this was, at the time, a new discovery, it has some of the characteristics of an Erowid-style "trip-report".

† From a private email from Dineen to her friend:


[...] {In} the first cup of tea I made him, I used a more generous pinch than that thinking we were going for a medicinal effect and I roughly counted 10-12 threads, given that some of them weren't whole. I added a bit of bottled lemon juice and some cardamom for extra Middle Eastern flavor and sweetened it with stevia.

He only drank about half the cup! He was giggling and somewhat giddy and decided to have the rest closer to bedtime when he needs the "dark thoughts" to calm. About a half hour after this first ramp up, he reported feeling very calm and relaxed.

Being on the Autism spectrum, Dave is very sensitive to the chemical reactions going on in his body when it comes to psychoactive drugs. He is the only one I know who can report exactly what's happening within him with a drug. The ramp-up giddy thing happened to him recently with Abilify (and some others I could list), but had some unpleasant side effects that he couldn't tolerate.

This evening he had a cup of tea with only 4 threads of saffron and experienced the same effects, just not as strongly and without feeling that he should stop halfway through the cup. This seems to be a decent dose for him.

Of course, being a natural product every source of saffron is going to have a different strength. Your mileage may vary. Etc, etc.

Anyway, we're pleased that we seem to have found something that will help Dave with his depressive ruminations without causing all the odd antipsychotic and antidepressant side-effects. That it's been used medicinally for thousands of years pleases Dave. That someone is attempting to research it scientifically pleases me. Dave may have a natural gift for chemistry, but the historical info impresses him more this time around I think.

Re: Re-discovery of Limpë {copy}

Very interesting that saffron can improve depression. In the past, I once bought saffron from the supermarket and boiled it to make tea until the water is golden.
“All that is gold does not glitter,
Not all those who wander are lost;
The old that is strong does not wither,
Deep roots are not reached by the frost."
Top
Post Reply
2 posts • Page 1 of 1