It has occurred to me that Grain Amaranth may meet many of the requirements for Yavanna's special corn (remember that Tolkien uses corn in the non-specific sense of grain) so I began more specific research about it. First of all, among many cultures, amaranth is associated with the Divine. The ancient people of the Andes regarded amaranth as sacred and in India it is called “ramdana” or god’s own grain.1 The root word “amara,” in both Greek and Sanskrit,  means eternal or deathless.1 Amaranth has been cultivated throughout the world for thousands of years, but use as a food fell out of favor in recent centuries. Its beauty as an ornamental for both flower and decorative seed heads have kept the genetics of this plant alive though. Recent interest in the last 20-30 years has brought grain amaranth back to the marketplace in the West. The Silmarillion gives us this description of a field of this divine grain: “Below them lay the woods of Oromë, and westward shimmered the fields and pastures of Yavanna, gold beneath the tall wheat of the gods.” Dave and I have seen a stand of amaranth grain and it is quite striking to see the large seed heads on the tall plants.

Let's go through the "On Lembas" article detail by detail and I will elaborate how amaranth fits the description of this special grain.

Amaranth has high protein content. I’ve seen references varying from 10 to 17%. Just 150 grams of the grain is all that’s required to supply an adult with 100% of the daily requirement of protein.2 Amaranth grain also has a high concentration of oil (6-10%)  that is mostly an unsaturated fat high in linoleic acid.3 There are more than 15 grams of fiber per 100 grams of amaranth2, making it very filling. Now all these things alone can lead us to this conclusion:


“Due to the fact that grain amaranth has high protein, as well as a high fat content, there is the potential to use it as an energy food. The balance of carbohydrates, fats, and protein, allow amaranth the opportunity to achieve a balanced nutrient uptake with lower amounts of consumption than with other cereals.”3

Consider this other interesting thing about the oil of amaranth, it has 7% squalene3, a type of oil typically harvested from shark liver. Squalene is the biological precursor to the steroids (those that our bodies make such as cortisol and cholesterol) vital to a healthy, hardy travelling person.  An internet site selling shark oil promotes squalene with this as one of its benefits:  “increasing oxygen uptake capacity and reducing blood lactate levels {thereby helping} provide stamina and endurance.”4

So far these qualities alone make me believe I’m on the right track, but let’s go on with the text.

…or of the hurt whose life was in peril.

Amaranth is considered “easy to digest—amaranth is traditionally given to those who are recovering from an illness or a fasting period.” 3 Remember those oils? Linoleic acid is one of the Omega-6 essential fatty acids and deficiency can result in poor wound healing.5 Squalene also has anti-inflammatory and joint pain control properties according to that same shark liver oil seller.4

On a side note, amaranth is a gluten-free grain, making it an excellent starchy energy source for those experiencing gluten allergies or celiac disease.

So far the nutrition of the grain matches, how about its cultivation?

If it was sown at any season, save in frost, it soon sprouted and grew swiftly… Else it needed only a little sunlight to ripen; for it took swiftly and multiplied all the vigour of any light that fell upon it.

This  poetic description of photosynthesis easily describes the rapidly growing amaranth plant that “produces  a large amount of biomass in a short period of time.”3  Amaranth plants are ready for harvesting 5-6 weeks after their seeds have been sown.   “Amaranth is a … plant that germinates quickly when sod temperatures reach 15°C to 18°C.”

…though it did not thrive in the shadow of plants of Middle-earth and would not endure winds that came out of the North while Morgoth dwelt there.

Amaranth is a warm weather crop, needing warm soil for the seed to germinate. “Seedling rate should be increased to compensate for lower emergence rates when soil temperatures are less than 15°C.”3 Also, the fragile seedlings of amaranth need to be sheltered and would not do well in a cold wind.  Not only do the young plants need warmth, but careful harvesting around frosts is important for the amaranth grower:


“A fall weather pattern consisting of a light frost followed by a period of mild weather can account for significant yield losses due to shattering (cracking of the seed hull). In some regions, a light frost partially dries the head but fails to penetrate the crop canopy and dry the entire plant sufficiently to permit harvest.” 3

The Eldar grew it in guarded lands and sunlit glades…

Amaranth is self-pollinating and the Eldar would have wanted to prevent cross-pollinating with other amaranths, so this would have been a wise and practical choice. The fragile seedlings would have been sheltered in the glades of a forest.  Also the trees of a glade would protect the mature crop from winds knocking the seeds from the ripe “ears.” This drought-tolerant crop would have been relatively easy to care for in a glade, as in not needing to worry about elaborate irrigation systems more readily established on a plain. I cannot help but be reminded of a Stone Age agrarian scratching out a plot in a natural clearing.

…they gathered its great golden ears, each one, by hand, and set no blade of metal to it.

Amaranth produces a variety of colors and golden is among them . I am sure you would agree these ripe seed heads are “great”: 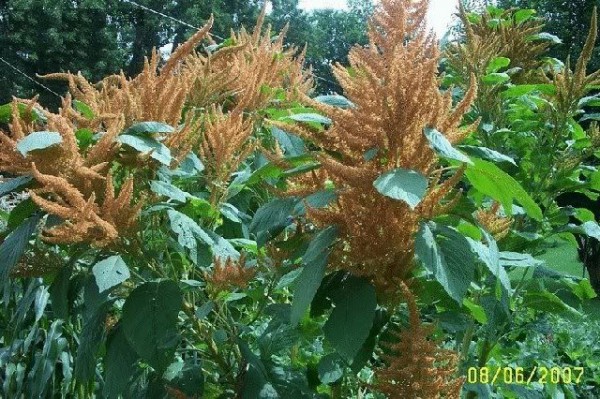 The tiny seeds require careful handling and without careful harvest techniques it is possible to lose the majority of the seed:

The shattering of the seed when ripe allows for easy harvest–just strip the seeds from the seed heads. The easiest way to harvest  is to place a sack over the top of the plant, encasing the seed heads and shake the seeds into the sack.  Another  gardener suggests the easiest way is bending the plants over a bucket and rubbing the seeds off into the bucket. Neither of these methods would require a scythe or blade of any type, in fact cutting the stems first would result in a great deal of the seed falling to the ground.

The white haulm was drawn from the earth in like manner, and woven into corn-leeps for the storing of the grain: no worm or gnawing beast would touch that gleaming straw…

Apparently amaranth crops have little problem with pests: “To date, insect and disease problems of economic importance have been minimal.”3 This refers however to the crop in the field, while Tolkien’s description refers to the grain stored in the corn-leep baskets woven of the amaranth haulm stems or “straw.” This may be explained by the presence of protective saponins on the seed coat often present on many seeds that are easily destroyed with cooking processes, making them easily palatable for consumption by the Eldar, but just enough to deter pests in a granary.

…and other evils of Middle-earth did not assail it.

While looking for pest resistance for the vegetable matter (straw) of the amaranth, I thought it interesting to note that a simple Google search on “amaranth pest resistance” brought up results on herbicide resistant amaranth. Many species of amaranth are considered nuisance weeds by farmers. Though the nutrient-rich plants make for great fodder for grazing livestock, many find the need to control it in their fields and are finding there are varieties/species that are apparently resistant to herbicides.

This detail-by-detail look at amaranth leads me to believe that some form of amaranth probably went into the creation of this “wonder bread” of lembas. Now that we have gone through what we know about the grain, we need to examine what else we know about lembas to decide if amaranth fits the bill for making this journey bread. We know that lembas was tasty and descriptions of amaranth are that it has a nutty sweet or even malty flavor, depending on the variety. The decision that amaranth can create  a thin, crisp cake brown on the outside and cream colored on the inside must be deferred for further discovery and kitchen experimentation.

Re: Of Lembas {copy}

This reminds me of the song named "Amaranth" by the band Nightwish (who also did the Elvenpath song).

Nightwish - Elvenpath
“The world is indeed full of peril, and in it there are many dark places; but still there is much that is fair, and though in all lands love is now mingled with grief, it grows perhaps the greater.” - Haldir